I came across this reading while listening to the reading of the Word at the first communion service of our class leader, Br. Fargo’s, oldest daughter.  Many national promises were heard therein, but Ez. 36 especially stands out for its stress upon replenishing the physical holy-land given to Abraham, Isaac, and Jacob. I’d like to break this chapter into two parts– firstly, the importance of the physical land, and, second, the conversion of Judah and Israel before their return.

Here’s begins the 8th verse, of the 36th chapter, of Ezekiel for our first section: 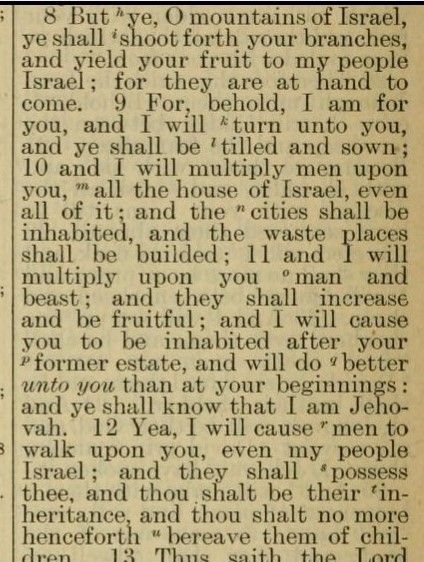 This portion of the Book of Ezekiel is fascinating since it prophecizes to the ‘land’ rather than an ‘assembly’ or people. The entire chapter, much like the opening part of this section (a reiteration of the beginning), starts with “And thou, son of man, prophesy unto the mountains of Israel, and say, Ye mountains of Israel, hear the word of Jehovah” (v.1). So, evidently, the land, especially if read literally, has a certain prevalence in this chapter.  i tend to think the prophet speaking to the mountains, while may be a metaphor, likewise underlines the basis of the Covenant as struck between the persons of God rather than a disobedient and captive people.

In verse 8, this metaphorical address continues, ‘O mountains of Israel’ and describes the particular blessings the Lord will proceed to fulfill. Rather than the decline now the land will be fruitful, both in terms of harvest and its people. Those given the land will not be the enemies of Jehovah (Edom is mentioned in verse 5 as well as by the commentators), but it shall be ‘the House of Israel’ (v.10,12). However, the return appears to possess a plenitude that far exceeds the rather ordinary or immediately historical. Consequently, Rev. Thomas Scott concludes these verses bespeak of a future blessing, and I believe such is apparent when lined alongside the spiritual promises discussed further below. Scott is also persuaded (and differentiates) the passage belonging to all Israel, not merely Judah. He says,

“The mercy, have promised, would be shewn to Israel, in the most comprehensive sense, and not to Judah exclusively. The outward state of the Jews was never so prosperous after the captivity, as it had been before that catastrophe: we must therefore understand this of their preservation from idolatry, and their adherence to the worship of God; and especially of the coming of the promised Savior. These predictions refer also to a future return of the Jews to their own land, when converted to Christ: and then indeed the Lord ‘will do better’ unto them and their land, than at their beginnings.“

Mr. Joseph Benson agrees, zeroing-in on verse 14, “thou shall devour men no more” as a promise still awaiting fulfillment:

“Those who think these promises were fulfilled in the restoration of the Jews from the captivity of Babylon, and their re-establishment in their own land, take the expressions no more, and not any more, in a limited sense, and understand thereby only a long period of time: but it seems more reasonable to suppose that these and such like prophecies, of which there are many in the Scriptures, remain yet to be accomplished, and that they respect the future restoration of the Jews to their own land, after the conversion to Christianity.”

The manner which these promises respecting land indicate a future rather than ‘preterist’ condition, for example, is Rome’s obvious ‘devouring’ of Jersusalem in 70 AD. Scott’s observation thusly follows:

“Though the whole land of Israel was not desolated after the destruction of Jerusalem by the Romans, as it had been after that by the Chaldeans; yet the slaughter made among the Jews was far greater, and they were entirely driven out of the land, and have continued in a state of exile from it for above seventeen hundred years. It seems therefore unavoidable, but that we must refer the full completion of these prophecies to some future event: when the land shall again become fruitful, and he inhabited by the nation of Israel to the end of time”

Now, the second part, beginning in the 23rd verse, of the same chapter & book, scripture says: 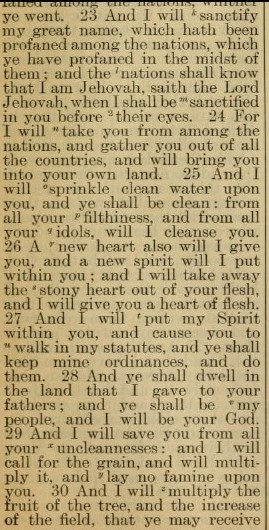 Our 18th-century commentators view this chapter as mostly prophetic overtone and  realized in latter days. Indeed, this section reads like a prologue to the New Jerusalem. We’ve already acknowledged the explicit focus on Israel’s ‘mountains’ and ‘land’. But, there’s also great spiritual promises declared within this section truly proper to the gospel dispensation . The reverend Scott is not impressed by Ezra’s revival, thinking the verse is deserving of evangelical times. Scott judges,

“But of whom was this spoken? Doubtless many of the Jews, who returned from Babylon, were thus renewed and sanctified: yet numbers of them continued strangers to these peculiar spiritual blessings, though preserved from outward idolatry. These promises indeed are pleaded by all true believers, in every age, and fulfilled to them: and this may be called the spiritual meaning. But the context speaks so expressly and repeatedly of the house of Israel being restored to the land, which the Lord had given to their fathers, that, in the prophetical meaning, I apprehend, it greatly confirms the opinion, that after the Jews shall be converted to Christ, they shall also be restored to their own land. Then these promises will be fulfilled to them in their fullest sense; and the subsequent part of the prophecy will be literally accomplished, in the sight of all the nations and the Jews are no doubt preserved a distinct people, on purpose to make way for this great display of the Lord’s power and truth, and thus to demonstrate to all the world the divine original of the holy scriptures.

Notice, however, a very important detail which all our 18th-century English commentators agree, namely, Israel only returns to the land ‘after’ conversion to Christianity. This point would have greater significance once the Evangelical movement reached its political peak in the late-19th century. The main promise outlined here is Israel, comprehensively speaking, would once again “know that I am Jehovah”, according to the truth of the Christian religion. Benson speaks in the same vein where he mentions ‘preparation’ before restoration, or spiritual precede temporal blessings:

“And ye shall dwell in the land-– Spiritual blessings, promised in the last three verses, are now followed with temporal blessings. Thus does earth often follow heaven, and godliness has the promise of the life that now is, as well as if that which is to come. When the Israelites are thus prepared for mercy, then shall they return to their possessions, and be settled again in them. And, there God will acknowledge them for his people, and will protect and bless them as such, bestowing liberally upon them all good things.”

Interestingly, for Scott a penance fitting for unbelieving Jews apparently would be related to the deed of blood libel.

“If we consider this passage, as a prediction  of the conversion of the Jews to Christ, and their restoration to their own land, the iniquities, which they shall especially remember with self-abhorrence, must mean their obstinate rejection of the Messiah, and their long combined opposition to this cause, and all their other sins as resulting from that unbelief.”

These particulars are usually missing from most current-day Christian zionists. However, such seems little different from St. Peter’s own admonitions in Acts 2.36:

And what was their response for this grievous sin? Verses 37-38 say “When they heard this they were pricked in their heart, and said unto Peter, and to the rest of the Apostles, Men and brethren, What shall we do? And Peter said unto them, repent and be baptized, everyone of you in the name of Jesus Christ”

Anyway, it seems Ez. 36 is urgent to include physical land, and other earthly benefits, after Israel’s regeneration in the Gospel. This chapter is one of several valuable ‘go-to’ bible verses Identity students ought to have at hand.